How to Paint a Semi-Realistic Moon with Watercolor 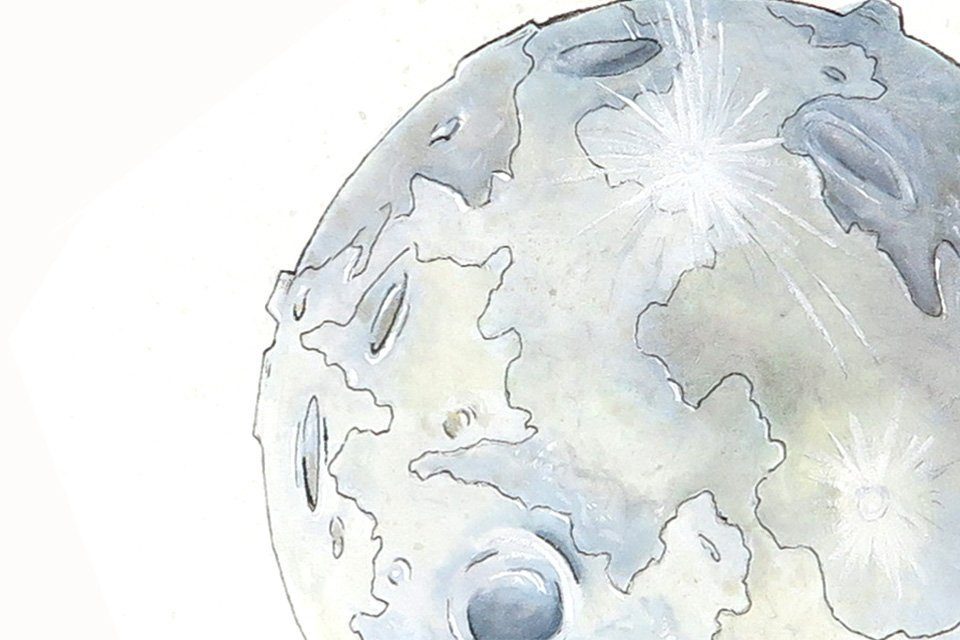 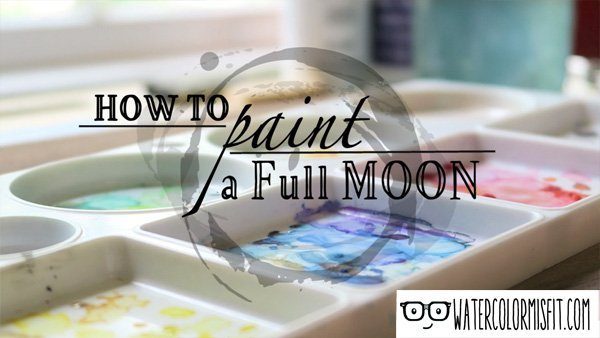 Finding inspiration isn’t very hard if your open to trying new things.  That is exactly what this tutorial is about.  Recently, I was really inspired to paint a full moon and make it as realistic as I could yet keeping with my style of painting.  Today, I’m going to walk you through my process of first drawing and then painting a semi-realistic full moon.

Before I begin here is a list of all the supplies I used today. 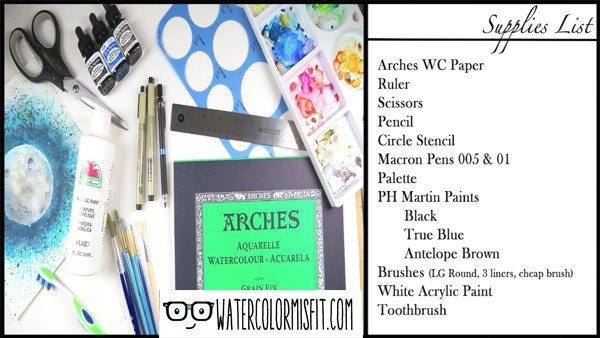 First, I cut an 8in by 8in square out of your watercolor paper.Then, with a ruler, I measured the center of my square and drew a circle using my stencil.  After, I had my circle drawn, I added 7 craters around my moon.   When drawing these I like to think of myself drawing odd shaped U’s hugging the surface of the moon.

(Just a quick artist tip, odd numbers are considered very pleasing to the eye.  Most photos and artwork is composed usually with 3,5,or 7 items.  Just something to think about.)

Moving on to our next step, I went a head and drew several full circles and half circles, as well as some ovals and odd round shapes scattered along the surface of my moon.  These will represent craters.  Next, I added two small circles near the bottom left and upper left corner.  These will be large impact white areas on our moon.  I then drew curved lines bursting forth from these circles as shown. 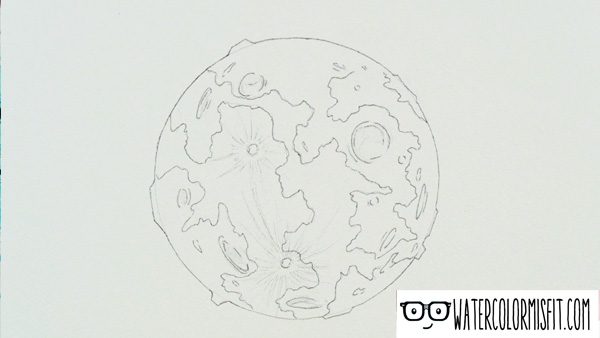 Afterward, I added some jagged lines which look similar to continents on our earth.  These lines will give the impression of mountain ranges later when we shade them.

Finally, ink your moon with indian ink pens which won’t smudge when we paint over it later.

After my ink has dried, say about 10 minutes or so I can begin to paint.

Using a round brush, I painted a clear wet layer of water over the sections where my shadows and mid-tones would be located.   I did not place water where I wanted my highlights.  I then took a watered down black paint and lightly touched the paper with my brush.  Since the paper is wet and the paint is wet it created cool blooming effects.  I then continued to dad this paint anywhere there would be a shadow, such as the left side of my moon, craters, or edges of mountain ridges.

I continued to add darker amounts of color as the paper slowly dried.  Making my shadows slowly become darker.  Once I liked what I saw, I set the painting aside to dry. 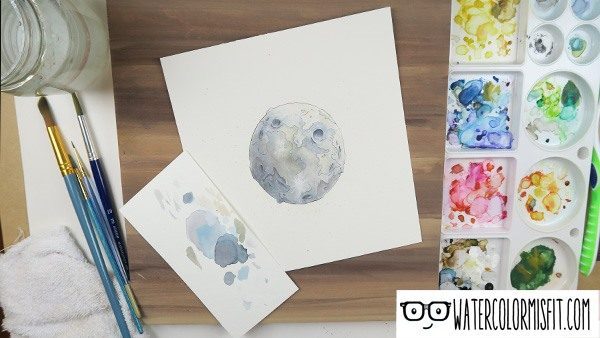 After my painting had dried, I notices my craters and moon weren’t quite as dark as I liked.  So I once again added darker shadows to my craters and valley’s to make them stand out.

Then using acrylic white paint, I added highlights with a liner brush along the craters and mountain ridges.  Then with this same brush, I added two large white craters that explode out.  Next, with a dry brush just to add a bit more texture I dabbed some white paint over my moon.  Once again, set it aside to dry.

Finally, mixing a brown glaze, I lightly painted over the darker craters, and some of the highlighted regions.  This will add greater depth and warmth to your painting.

And that is it!  A Semi-Realistic Full Moon Painted with Watercolors.

If you want to learn how I painted this awesome splatter technique background make sure to check the video linked below.

This site uses Akismet to reduce spam. Learn how your comment data is processed.

The Easiest Way to Paint a Hyacinth Flower

How to Paint a Splatter Effect with Watercolor

Hi there! My name is Carrie and I'm the artist behind Watercolor Misfit. Here I share my journey with watercolor and anything else I put my mind to! Welcome and feel free to explore! If you want to learn more about me - make sure to check out Watercolor Misfit Land! There I post more indepth videos as well as my online courses/workshops.